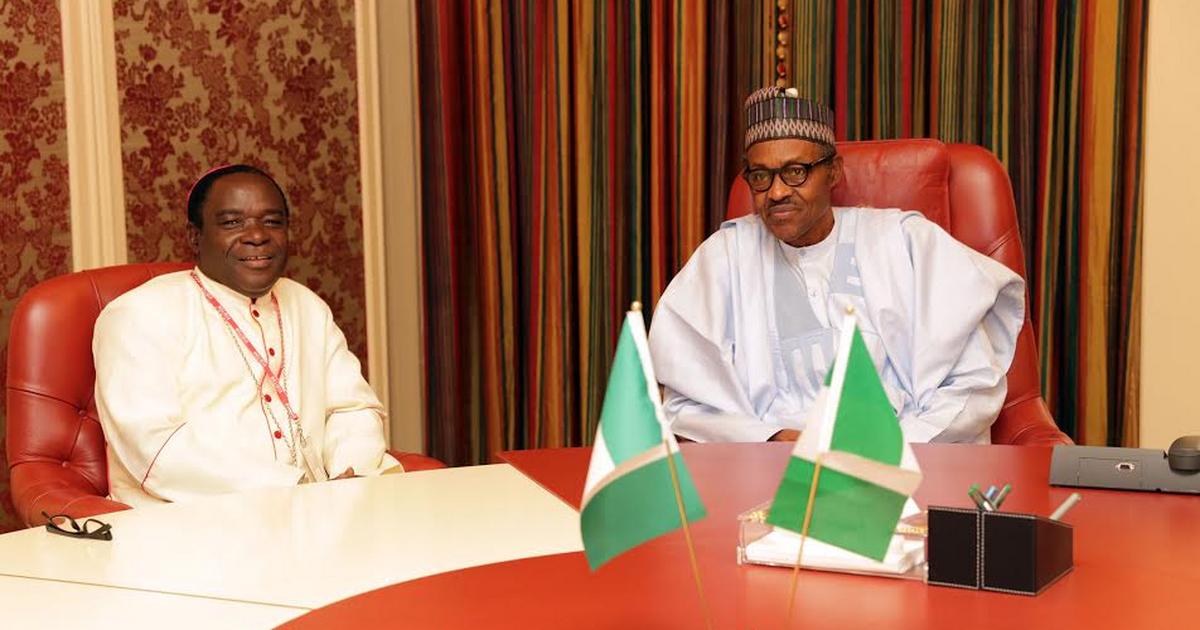 A statement by the president’s spokesperson, Malam Garba Shehu, Sunday in Abuja, advised Kukah to refrain from sowing discord and conflict among Nigerians.

According to him, religious leaders who preach respect for the truth have a duty to practice it, and it is a moral and practical responsibility to publicly defend the truth.

He said: “There is no place in mainstream civil discourse for those who actively, negatively and publicly label an individual ethnic group, especially in front of a foreign audience.

“For all of our challenges as a nation, almost all of us seek to live together in harmony, celebrate differences and find common ground as Nigerians above all else.

“But people like Kukah are doing their best to sow discord and conflict among Nigerians.

“More than any other group of people, leaders – in politics or religion who preach respect for the truth have a duty to practice it. It is a moral and practical responsibility.

“Based on the history of the well-known Church, she will stand up publicly for the truth.

“It is time for others to do the same.”

Shehu described Kukah’s mission statement to the United States as a “foreign political tour that opposition politicians take – visiting foreign leaders and lawmakers in the United States, the United Kingdom and in Europe “.

He said such “tours” were meant to get maximum media attention in his country to score cheap political goals.

“So, according to the argument, if they are heard seriously abroad, returning Nigerian citizens should surely listen to them too.

“But in order to be heard and to maximize media coverage of their activities at home, these tours inevitably involve painting the worst possible picture of our country in front of their chosen foreign audience.

“Soon we inevitably hear an identical list of racist tropes against northerners, how one religion dominates governance above all others, and how the government is doing nothing to remedy the disruption between ranchers and farmers.

“And how the government is spending money on infrastructure for the benefit of everyone except the speaker’s group and religion.”

“Of course, in order not to disappoint their Western audience, whatever the case, the list is always the same – and always on the bias for those who wish to cross-check”, he said.

Nigerians expect this from their unimaginative opposition, Shehu said.

He argued, however, that “It is disturbing when a self-styled clergyman copies the worst excesses of those seeking personal advancement in public service. “

He noted that only the Buhari administration had so far presented the first and singular plan in almost a century to address the challenges of pastoralists – a fact recognized by international NGOs, including the International Crisis Group. .

“To tell a foreign public that this government is doing nothing is an unbelievable lie.

“To suggest that infrastructure investments between Nigeria and Niger are unnecessary and biased – while a similar infrastructure project between Lagos and Benin has revolutionized the two neighboring economies for the benefit of our two countries – is quite worrying” , he further maintained.

The presidential spokesman also frowned at Kukah’s attempt to accuse the Buhari administration of promoting ethnic and religious sentiments in the country.

“There is no bias in this government when the president is from the north and Muslim, the vice president from the south and Christian, and the cabinet is equally balanced between the two religions.

“But there is also nothing in our Constitution to say that political office should be distributed according to ethnicity or creed.

“It takes a distorted mindset for a critic to think ethnicity is of paramount importance in public appointments.

It is even more disturbing to hear a clergyman isolate a group for purely ethnic criticism ”, he added.

Shehu also condemned Kukah’s position that only Christian students were largely targeted or kidnapped by bandits in the north of the country.

He said: “With all due respect to the esteemed position he occupies, the Bishop’s assertion that only Christian schools are the target of bandits or terrorists is not supported by the facts on the ground.

“It is sad to say but also true that victims of crime, kidnappings, banditry and terrorism are found in all walks of life.

“Sad but true that students from Kankara in Katsina State were kidnapped by bandits of the same Islamic faith as those they took away.

“The same may be true of those who still detain the 134 students of the Islamic school of Tegina in the state of Niger.

“The nation has witnessed the sad incident of female students kidnapped by bandits in Jangebe in Zamfara State and over 100 predominantly Muslim students at Federal Government Girls College Birnin Yauri in Kebbi State.

Birnin Yauri’s students remain in captivity as the country’s security agencies work to free them unharmed.

He added: “The attack on Christian students is sad and unacceptable; the same goes for the kidnapping of students of other faiths.

“The claim that only Christian schools are being targeted is totally false.

“As a nation and a people, we must together define evil as evil. We must not allow our religious differences to divide us.

“No one wins except the evildoers when we divide our ranks according to ethnicity and religion to confront them. “

According to him, bandits, kidnappers and terrorists are the enemies of the people who must be faced in unison.

The presidential aide cited sections of the Holy Bible to justify his condemnation of those who use ethnic and religious sentiments to promote social discontent among Nigerians.

He said: “To be clear, the Bible is definitive on issues of ethnicity and racism:

”In Romans 2: 9-10 it says: ‘There will be distress and distress for every human being who does evil: first for the Jew, then for the Gentile; but glory, honor and peace for all who do good ”.

“And in Galatians 3:28: ‘There is neither Jew nor Gentile, neither slave nor free, neither male nor female, for you are all one in Christ Jesus.'”

He added that: “Whether we are Christians or Muslims, we stand up for these beliefs and are firmly committed to them in matters of governance. ”